Our Safari leaves Mombasa and drives north towards the vast wilderness of Tsavo East, Kenya’s oldest and largest park. Picnic lunch en-route and set up camp. Afternoon at leisure. 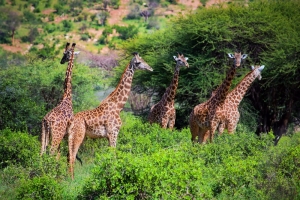 The late afternoon 4.30p.m. Game drive exploring the park where we can expect to see elephant, lion, leopard, buffalo, kudu, zebra and hartebeest. Dinner and overnight at the camp.

Tsavo East, the larger of the two, lies to the east of the Nairobi – Mombasa highway, equi-distant between Nairobi and Mombasa and offers a vast and untapped arena of arid bush which is washed by the azure and emerald meanderings of the Galana River, guarded by the limitless lava reaches of the Yatta Plateau and patrolled by some of the largest elephant herds in Kenya.

Game drive early morning before Breakfast. After breakfast leave Tsavo East with game drive en-route and cross into Tsavo West National Park for lunch and set up camp. Later on in the afternoon, game viewing in the park. Dinner and overnight at the camp.
Maasai in Amboseli

After breakfast a game drive in the park including a visit to Mzima springs where Hippos, Crocodiles, and various species of fish can be seen in the crystal-clear waters. Then proceed to Amboseli Game Park. Picnic lunch enroute. Time allowing evening game drive. Dinner and overnight at the camp.

After an early breakfast leave Amboseli for Nairobi and proceed to lake Nakuru national park, picnic lunch en-route and proceed for a game drive of Lake Nakuru often described as ‘World’s greatest bird spectacle” return to camp for dinner and Overnight at camp or Budget Hotel.

After breakfast leave Lake Nakuru for Masai Mara. Game reserve, picnic lunch en -route. On arrival set up camp on time allowing proceed for a game drive in search for Black manned lions, Elephants, Leopard, Cheetah, Buffalo and other plains game. Return to the camp for dinner and overnight.

Full day game viewing .All meals and overnight at the camp.

The Maasai Mara Game Reserve is arguably Kenya’s most popular game sanctuary. It is the most famous and most visited game reserve in Kenya. The film ‘Out of Africa’ was made to a great extent in this reserve. Virtually every type of wildlife can be seen at the Mara. A spectacle worth seeing is the annual migration of millions of wildebeest, zebra and gazelle from Serengeti plains across the Tanzania border and the Mara River to reach Maasai Mara grazing fields from late June. The dramatic crossing of the river and the preying on the migrants by predators can be viewed from early July to August. The reserve abounds with birdlife since dose to about 452 species have been recorded. Hot air balloon safaris are readily available in this park

– International air transportation to and from Nairobi
– Expenses of personal nature such as visas, travel/baggage insurance, laundry, beverages, tips etc