9 days Kenya Tanzania combined camping tour starts from in Nairobi and takes a simple route  through the rift valley to Masai Mara, Amboseli, Ngorongoro, Serengeti , Lake Manyara and end in either Arusha or return to Nairobi.

While on the safari, the accommodations consist of budget camps in Kenya and a two-man tent in Tanzania, which brings you up close with nature.

NB. In case you want  to stay in budget tented camps in both Kenya and Tanzania, we can upgrade

Morning and afternoon game viewing inside the Park. Search for wild game black manned lion for which Mara is famous for, cheetah, buffalo, wildebeest, zebra, leopard, grants gazelle are quite common, even the rare rhino might come out of the thicket for you, hyenas are plentiful, Extend your drive to the hippo point where schools of hippo submerge on the approach of vehicles only to surface seconds later to shot and gamble their displeasure as the crocodiles sunbathe on the river banks mouths agape. Between meals there is optional visit to the maasai villages for an insight to their culture if clients so wish. Meals and overnight at the camp..

Early morning game viewing drive searching for any wild game you might have missed previously, Breakfast at lodge and depart for Nairobi with game viewing enroute as you leave the park. Lunch in Nairobi (at the Carnivore Restaurant $40 per person) and proceed to Amboseli at the foot of the mighty snow-capped Mt. Kilimanjaro, Africa’s highest peak, Game viewing enroute to the Camp .Dinner and overnight at the Camp.

Morning and afternoon game viewing inside the park. Amboseli is a photogenic Park and hosts great number of game including the lion, elephant and the splendid cheetah. Meals and overnight at camp.

Morning game viewing drive in Amboseli. Breakfast and depart crossing the border for Ngorongoro  crater via Arusha for Lunch, Afternoon proceed to NgoroNgoro, Game viewing enroute to the camp. 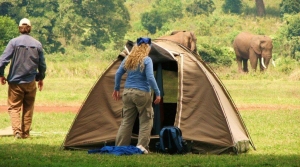 Breakfast at the camp and depart for half day crater tours with picnic lunch, depart for the vast Serengeti National Park via Olduvai Gorge ,site of the famous archeologist Dr. Leakey where fossils of human and animal believed to be over 2 million years are seen. Lunch enroute arriving Serengeti in the afternoon. Afternoon game viewing inside the Park known to host great herds of plains game. Dinner and overnight at the camp..

Morning and afternoon game inside the Park taking you to different parts of the park famous for the annual migration when millions of wildebeest (gnus) and zebra set off for maasai Mara in search of better grazing grounds and water, search for numerous plains game. Meals and overnight at the camp.

Early morning game viewing at the park. Return to lodge for breakfast after which you will depart for Arusha arriving for lunch at Arusha Impala Hotel. Afternoon proceed and cross the border and onwards to arrive Nairobi early evening and transfer to the airport for your flight out.

-Accommodation on safari shall be in a budget tents in Kenya and campsites in Tanzania.

-All Camping equipment except sleeping bags in Tanzania

-Game drives as per itinerary

-All Government taxes and levies

-Additional accommodation before and at the end of the tour

-Tips on safari and at camps