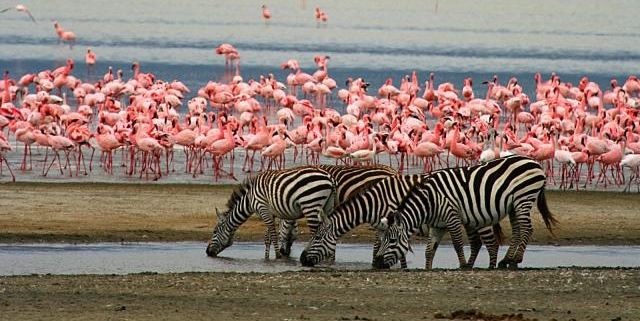 This Tanzania camping safari offers a glimpse to numerous wildlife including monkeys in the forest, lions in trees, elephants amongst acacias and a wide variety of animals inside a collapsed volcano,  as well as cats like Cheetah, Leopard and Lion, among others.

Accommodation will be in a 2 man tent with form mattresses, all camping equipment are provided and it involves using public campsites, clean washrooms which are highly hygienic.

Departing from Arusha in the morning, drive to Lake Manyara National Park with lunch boxes. Proceed on a game drive on arrival. Dinner and overnight at camp.

The Lake Manyara National park is serene and beautiful with main attractions of a rich bird life, tree-climbing lions, its elephants, and hippos that you can see at closer range than most other places. Lake Manyara is an alkaline lake and at certain times of the year hosts thousands of flamingos and a diversity of other bird life. Although it is one of the smallest parks, its vegetation is so diverse enabling it to host a variety of wildlife habitats.

After breakfast depart for Serengeti with a game drive and picnic lunch en route and in the afternoon. Dinner and overnight at Seronera Campsite.

You can visit the park all year round but there is less game in the park during the dry season – July /October, where they migrate to the Masai Mara in Kenya. During March to May the herds move in search of grazing to the southern section and in May to June, they move towards the western corridor of the park. Serengeti in the low season will still offer game viewing to match that of any park in Africa, and for some, the fact that there will be fewer tourists may be an added bonus.

Begin your morning game drive after breakfast. Depart in the afternoon for Ngorongoro Crater with a game drive and optional visit to Olduvai Gorge en route. Dinner and overnight at camp at Simba campsite.

The Ngorongoro crater is the world’s biggest whole volcanic caldera at 8300 sq km and is arguably the most stunning arena. It is frequently described as one of the wonders of the world, not only because of its geological magnificence, but also because it serves as an extraordinary natural sanctuary for some of Africa’s largest populations of large mammals. Ngorongoro and other freestanding mountains are volcanic in origin, formed during the fracturing process that created the Rift valley 15 to 20 million years ago. When it peaked in size 3 million years ago it was a similar height to Mt. Kilimanjaro today.

After breakfast descend into the crater floor for crater tour with picnic lunches. Depart mid-afternoon for Arusha arriving early evening.

Price includes:
– Transportation in a custom safari jeep with pop-up roof ideal for game viewing and sightseeing
– Services of a trained and experienced English speaking driver/guide
– Accommodation in a 2 man tent at the campsite with all camping equipments
– Three meals per day prepared by our safari cook
– Bottled water for use during the safari
– Game drives and park entry fees

Not included:
– International air transportation to and from Nairobi
– Expenses of personal nature such as visas, travel/baggage insurance, laundry, beverages, tips etc